Three law firms operating in Texas dominated capital markets activity by advising on 70.5 percent of all securities offerings during the first half of 2018, according to data collected exclusively by The Texas Lawbook’s Corporate Deal Tracker.

Vinson & Elkins, Latham & Watkins and Baker Botts together worked on 91 of the 129 securities offerings during the first six months of this year. The transactions handled by those three firms raised nearly $52.6 billion — 78.7 percent of the $66.8 billion total generated through CapM in H1 2018.

But the Corporate Deal Tracker also shows that the legal industry in Texas for the CapM practice is quickly evolving as the result of the heated lateral market, and that the rankings could be be vastly different during the second half of 2018.

The three firms’ dominance of such a profitable practice also points to why Kirkland & Ellis is making a big push into CapM in Texas, including its recent hire of Latham partner Sean Wheeler in Houston.

The Bayou City saw the most capital markets action in the first half with 132 transactions – up from 116 in the second half of last year – while Dallas generated 17 (down from 24) and Austin had 8 (up from 3). During the first half, 16 of the top 17 capital markets lawyers were located in Houston.

For H1 2018, V&E won the top spot in CapM transaction count with 46 offerings, which is 11 percent fewer than the 52 they handled in the second half of last year. 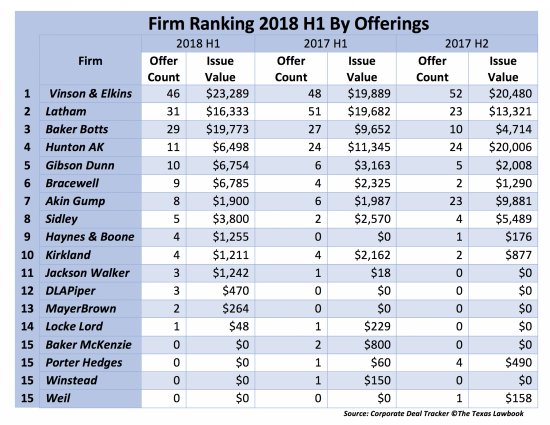 Editor’s Note: Individual CDT rankings are scored with a full credit for each offering deal led by a single lead lawyer. Credit is shared by both lawyers when a deal or offering involves a co-lead.

Latham & Watkins came in second among firms in Texas, although the number of deals it counseled on dropped considerably first-half-over-first half.

Latham partner Ryan Maierson in Houston was the third-ranked capital markets attorney in Texas. J. Michael Chambers of Latham held a share of sixth with two others; and John Greer shared eighth with Latham colleague Sean Wheeler, who has since moved to Kirkland.

Hunton Andrews Kurth hung on to its fourth-place ranking first-half-over-first-half. However, the number of transactions it handled fell off considerably, from 24 issues in the first half as well as in the second half of 2017 to only 11 in first half of 2018.

Gibson Dunn & Crutcher came in fifth, boosting its count to 10 transactions in the first half versus 6 in the same period last year and 5 in the second half of 2017.

Gibson Dunn’s top capital markets lawyer for the period was partner Doug Rayburn, who offices out of Dallas and Houston. He was credited with 3.5 transactions.

Baker Botts overtook Latham for the number-two spot in terms of value, handling almost $19.8 billion worth of transactions in the first half versus $9.6 billion in the same period last year and $4.7 billion in the second half of 2017.

The firm’s ranking was helped by being involved in the second largest offering in the period, a $2.5 billion notes issue by EQT Midstream Partners (Baker Botts counseled the issuer) along with several other billion-dollar transactions.

Baker Botts’ performance left Latham at third generating $16.3 billion worth of capital markets work in the first half compared with nearly $19.7 billion in the same period in 2017 and $13.3 billion in the second half of 2017.

Bracewell partner Will Anderson in Houston, credited with four transactions, tied for ninth among Texas capital markets lawyers. Partner Charles Still in Houston, associate Josh McNulty in Dallas and partner Troy Harder in Houston each worked on one issue.

Other active capital markets lawyers among other firms were partner David Buck at Sidley Austin in Houston, who joined from then-Andrews Kurth Kenyon last year (he was credited with three issues); partner John Gilluly at DLA Piper in Austin (he was also credited with three deals); and Akin Gump partners John Goodgame in Houston and Seth Molay in Dallas (they each worked on two deals).