This edition of the appellate roundup features a reference to “occult mysteries” in Exxon’s $1.5B tax dispute, the dismissal of an emotional distress lawsuit stemming from a gag gift and more.

The First Court of Appeals on Tuesday issued an opinion affirming a trial court’s dismissal of malicious prosecution and derivative claims against Lisa Blue, Stephen Malouf, Charla Aldous, Mike Lynn and Jeff Tillotson. It wasn’t clear Tuesday whether Hill III would take the long-running fight to the Texas Supreme Court.

Abortion, Texas Republicans and the Slaughterhouse Cases: A Collision Ahead

Despite the recent threats of conservative lawmakers to impose civil and criminal penalties on Texas residents seeking an abortion in another state, the privileges-or-immunities clause and the dormant commerce clause can protect interstate travel for those parties. But will they given the current makeup of the federal courts? 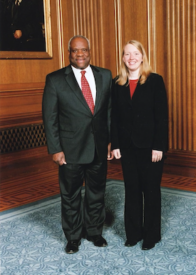 Bobbleheads and Smoked Brisket at SCOTUS: Recollections and Advice from Former Supreme Court Law Clerks Who Now Practice in Texas

Washington D.C. may have an allure as the “Nation’s Capital,” but Texas certainly has demonstrated its own allure: of wide-open spaces, the Dallas Cowboys, longhorns, Willie Nelson, SXSW to name a few. But Texas has also attracted its share of those top-tier lawyers whose résumés denote them as a former clerk to a U.S. Supreme Court justice.

It’s a rarified distinction, and The Lawbook’s Tony Mauro interviewed a baker’s dozen of them about the path they took to get there, about their experiences inside and about their decision to bring their elite professional skill sets back to Texas. It is safe to say that they remain awed by the experience.

This inaugural edition of Appellate Roundup features two Fifth Circuit rulings reversing Judge Lynn Hughes, and a ruling from the Fourth Court of Appeals allowing a police shooting suit against University of the Incarnate Word to move forward.

In a brief on the merits filed Wednesday, the Office of the Attorney General argued a whistleblower lawsuit brought against him by former high-ranking attorneys in the office should be dismissed because the Texas Whistleblower Act doesn’t apply to him. Carlos Soltero of Soltero Sapire Murrell, who represents one of the whistleblowers, told The Texas Lawbook he’s confident the Texas Supreme Court — like the Austin Court of Appeals panel and a Travis County District Court judge who have allowed the case to move forward — will find no merit in the argument.

Roel Canales will get another shot at proving Pay and Save was negligent in the way it displayed watermelons. But the Fourth Court of Appeals panel said the evidence supporting the gross negligence claim was too weak and ordered Canales take nothing on that claim.

The six-year bear of a legal battle between the Electric Reliability Council of Texas and Panda Power has again reached the Texas Supreme Court. In a case being watched by scores of lawyers in the Winter Storm Uri litigation, ERCOT wants the state’s highest court to declare that it is part of the state government and thus immune from civil lawsuits. Panda claims ERCOT knowingly produced false market data in 2011 and 2012 that led it to invest $2.2 billion to build three new power plants and doesn’t deserve immunity.

A handful of Fifth Circuit judges seem to have it out for the U.S. Securities and Exchange Commission and “the agency’s current activism.” Two judges issued a concurring opinion that clearly invites defendants being accused of financial fraud to challenge the SEC’s use of “no admit, no deny” settlement agreements. “If you want to settle, SEC’s policy says, ‘Hold your tongue, and don’t say anything truthful – ever’ — or get bankrupted by having to continue litigating with the SEC,” Judge Edith Jones wrote. “A more effective prior restraint is hard to imagine.”

The Texas Lawbook has insight from several legal experts who say they understand Judge Jones’ concerns but say eliminating the “no admit, no deny” provisions in settlements would cause tremendous upheaval in the system and place defendants at an even bigger disadvantage in their negotiations with the federal agency.

After what seemed a last-minute recusal in a case with millions on the line, the Texas Supreme Court asked for the governor’s appointment of two temporary justices to break a probable stalemate in reaching a resolution in the Volkswagen emissions-cheating scandal case. Now the court must determine whether, as VW argues, the governor’s commission of special justices poses due-process violations.

Want the latest in appellate law news? Sign up to receive our weekly newsletter of just the latest Appellate news.