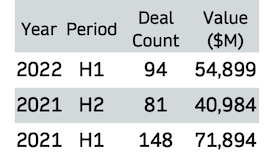 A sticky stock market and lingering fears of inflation depressed capital markets transactions during the first half of 2022. But it may be premature to project the same fate for the second half of the year, according to Texas dealmakers. The Texas Lawbook explains. 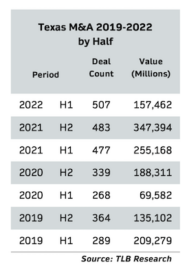 Texas Corporate dealmakers thought there was no way 2022 could match the record number of M&A transactions they handled in H1 or H2 2021 – both were records. But new data from by The Texas Lawbook’s Corporate Deal Tracker shows M&A activity hit another record high during the first six months of 2022 – albeit by an inch or so.

The dollar value of transactions declined significantly from the year before because there were no megadeals announced by the likes of AT&T, Chevron or Match.com. As you might expect, the energy sector led the way. The Texas Lawbook has the data and insight from the experts.

An animated bouncing ball may be needed to follow the transactions market these days. M&A for the first quarter is down worldwide 23 percent by volume over last year, while deals over $10 billion are up twice that. More on those trends in the weekly CDT Roundup, along with a relatively slim roster of Texas dealmakers reporting last week.

In a week of relatively weak M&A traffic, the increased prominence of healthcare deals is, once again, front and center. The deals these days are not just for healthcare technologies or hospital real estate — the M&A market for professional care itself is becoming abundantly clear. That, and the week’s dealmakers in the CDT Roundup.

Something paradoxical happened to Texas energy deals in 2020 and 2021: They increased their share of the overall M&A market. This comes after a pandemic and a couple of notable energy disasters. But numbers aren’t always exactly what they seem. The CDT Roundup explores the anomaly along with the weekly roll call of Texas transactions. 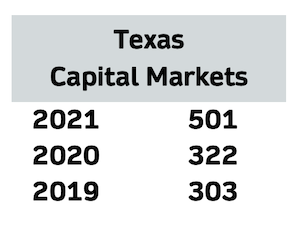 2021 Capital Markets in Texas: An Extraordinary Year ‘Across the Board’

Capital markets deals in Texas were up — way up. The value of those deals were down — way down. But that’s not necessarily a bad thing, say our lawyer/dealmakers. Reduced capital budgets, acquisitions made with a clearer sense of purpose and a broader base of issuers created a market in which IPOs made their comeback — and SPACs made their presence felt.

With clients Tailwater Capital and Montage cranking up deals already this year, 2022 has started with a bang for Kirkland & Ellis partner Kevin Crews. Crews shared with The Roundup some of his early observations on the broader range of deals he’s seeing in the new year, as well as his views on the surprising and continuing rebound for IPOs. That, and our weekly rundown of deals handled by Texas lawyers in the CDT Roundup.

Online gaming, along with outright gambling, is gaining traction in M&A. As the lines between fantasy sports, sports books, remote gaming and casino-based gambling blur, the deals, whether domestic or international, are getting bigger and more involved, even for Texas lawyers. More on that, along with the weekly roll call of Texas-related deals in the CDT Roundup. 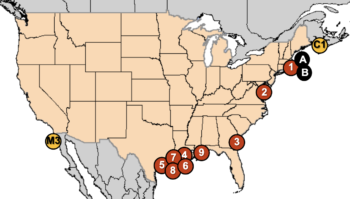 Germany announced this week that it is halting certification of the Nord Stream 2 natural gas pipeline from Russia. Germany is Russia’s largest European market for their gas, so the move is not insignificant. But the move could have even broader significance for the new Texas alternative to alternative energy: LNG. The CDT Roundup explains, along with its weekly roll call of lawyers involved in what was the year’s best week thus far in M&A.

According to a report by Bain, the consulting firm, healthcare M&A was up by 16% in 2021 by volume but also up by 44% in value. The same can be said in Texas where healthcare deals proved both plentiful and interesting. More on that and the transactions reported last week in this latest CDT Roundup.