After three years of record deal-making between Texas businesses and foreign corporations, cross-border mergers and acquisitions involving Texas companies have plummeted during the past year.

The amount of foreign investment in Texas assets plunged from $82.4 billion in 2016 to $18.6 billion so far this year, according to new Mergermarket data provided exclusively to The Texas Lawbook.

The number of multinational transactions with foreign companies buying Texas-based companies has declined 16 percent in 2017 from a year earlier.

Mergermarket data shows that Texas multinational deals have plunged from 19 in the third quarter – and an average of 22 transactions per quarter from 2014 to 2016 – to only eight such deals so far in the fourth quarter of this year. 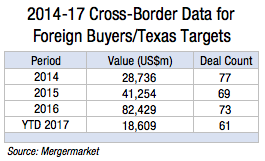 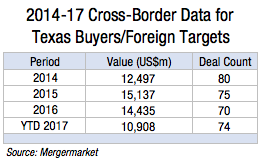 “A strong dollar is going to reduce the appetite of foreign buyers [for inbound deals,]” Mergermarket energy analyst and writer Chad Watt told The Texas Lawbook. “But even a vague American First policy is going to pour cold water on foreign buyers’ desire for Texas (and American) targets.”

“I doubt insanity coming out of the White House has anything to do with it, but the dollar does.” Bracewell partner Alan Rafte

Since 2014, there have been 579 multinational transactions with Texas companies as the buyers or sellers with a total transaction value of $224 billion, according to Mergermarket.

While Texas companies acquiring non-U.S. assets comprised nearly 52 percent of the cross-border deals during the past four years, the value of the foreign investments in Texas has been more than three times larger.

Michael Considine, a partner in the Dallas office of Jones Day, says the earlier rise in cross-border deals involving Texas companies is a direct reflection of Texas’ growth and repositioning in the global market.

“Not only are you seeing global companies either increasing their presence or establishing headquarters in North Texas, but historically ‘local’ companies are taking advantage of the global connections to expand their businesses,” said Considine, who represented Proctor & Gamble in a trio of brand divestitures to European buyers.

Five Houston companies – Schlumberger, Apache, National Oilwell Varco, ConocoPhillips and Huntsman – and five Dallas-Fort Worth businesses – Solera Holdings, ExxonMobil, Sabre, Flowserve and AT&T – were involved in the most cross-border transactions during the past four years.

Schlumberger did 13 such deals, but most of its acquisitions involved privately held companies and the deal values of those transactions were not disclosed.

Conoco-Phillips has been involved in five multinational transactions valued at a combined $13.7 billion. Huntsman was involved in five international deals, including an attempted $10.3 billion merger. AT&T has acquired four foreign businesses for a combined $9.9 billion.

But the five largest cross-border deals during the past four years all involve foreign companies buying Texas businesses: 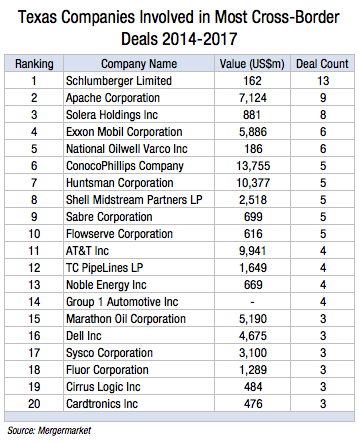 Considine thinks the recent weakness for such deals results from a significant amount of market hesitation for both domestic and international M&A.

“On the global stage in just the last year, China released guidance scrutinizing outbound investments; CFIUS [the Committee on Foreign Investment in the U.S.] has taken an active role reviewing inbound transactions; and the EU is working on a EU-wide framework for reviewing foreign investments,” he said. “In addition, the lack of certainty regarding U.S. tax policy has arguably had a dampening effect on the market.”

Eric Otness, a partner at Skadden Arps in Houston who counseled Colorado-based beverage packaging company Ball Corp. on its $8.4 billion acquisition of the U.K.’s Rexam last year, said energy-related cross-border deals have fallen off due to lower oil prices.

“We saw a lot of foreign interest in U.S. oil and gas assets because of depressed prices, but for various reasons, some of the deals didn’t happen,” said Otness, who cited his own involvement in a large oil and gas deal involving a foreign buyer. The deal died, he said, because of low and fluctuating commodity prices.

Otness predicts a big pickup in cross-border activity in the energy sector if oil prices stay in the middle to upper $50-per-barrel range. But concern remains about the strong dollar and various regulatory changes and uncertainties that existed before and during the Trump administration.

“We have clients around the world who want to put money to work in the U.S., particularly in energy infrastructure, but there remains a considerable amount of uncertainty and tremendous competition,” he said. “As a result, foreign investors are taking a second look; and some may seek out opportunities elsewhere.”

Otness said some of the challenges of getting energy deals done with foreign buyers include a lack of familiarity with how deal-making is done in Texas, discomfort with the auction process or having to compete for deals and getting the deal cleared through CFIUS.

“The challenge is for us to make the bid as attractive as possible and ensure it is competitive with bids from U.S. investors,” he said.

Jonathan Newton, managing partner of Baker McKenzie’s Houston office, agrees that both the strong dollar and uncertainty about tax reform have dampened interest in international deals, but he’s not so sure the Trump administration is discouraging activity.

“I don’t think anything about the current administration is having an effect,” he said.

“I doubt insanity coming out of the White House has anything to do with it, but the dollar does,” said Rafte, who also thinks uncertainty about U.S. tax reform has been a factor.

Newton and other legal experts said there’s a big learning curve when it comes to cross-border transactions, from local employment issues to cultural differences to integration challenges.

Considine said he expects to see more direct transactions with the U.S.’ neighbors to the north and south, particularly Mexico, which is holding its presidential election next year.

“We may see significant inbound investment by Latin American companies seeking to diversify and fortify their positions,” he said.

Considine said the biggest challenge of cross-border deals is getting people on both sides of the table to connect.

“Sometimes that requires a long journey just to look people in the eye and make sure you have a deal,” Considine said. “I believe strongly in the premium offered by in-person negotiations.”