Mergers and acquisitions involving middle and lower middle market Texas businesses slid in 2018, putting the fourth quarter of this year on track to have the fewest such deals since early 2010.

New data by Mergermarket, provided exclusively to The Texas Lawbook, shows that the number of M&A deals involving Texas businesses with a deal value of $500 million or less was down 14.8 percent during the first three quarters of 2018 compared with a year earlier.

Watt said there’s no obvious trigger that caused it to happen.

“Interest rates are a bit higher. Oil prices are somewhat lower. The specter of a trade war still looms, but no dealmakers are saying that any of those are major factors in deals not getting done,” he said. “In fact, the dealmakers I talk to act like there is no problem at all, and they are pretty upbeat.”

Rick Lacher, a managing director at investment bank Houlihan Lokey in Dallas, said there’s a healthy level of activity, with attractive companies still being coveted and current market conditions having very little impact on those deals. But there’s a backdrop of uncertainty with buyers becoming a bit more cautious.

“We are in one of the longest – if not the longest – M&A cycles and the longest bull market. At some point, there will be a dip,” he said. “I’m not sure what will cause it or whether it will be a minor speed bump or something bigger. For now, there is nothing to indicate it is around the corner, so I expect the current conditions to continue for the foreseeable future.”

“In terms of activity, we are extraordinarily busy right now both on existing transactions and new prospective clients,” he said. “Moreover, pitch activity on new opportunities continues to be extremely strong – it has been for the last half of 2018 but has intensified in the last couple of months.”

Alain Dermarkar, a partner at Jones Day in Dallas, said it’s hard to predict what the market and economy will look like as 2019 unfolds, since they’re dependent on macroeconomic factors, but he hasn’t seen a change in the state of the middle market.

“The market continues to be robust and competitive and I think it will continue to be that way in the immediate near term,” he said.

Dick Wynne, a partner at Winston & Strawn in Houston who works on a lot of oil and gas deals, said the third quarter was very strong but the fourth quarter has been softer, which could be because of the recent commodity price drop.

“Even though crude prices have been off over the last month, middle market companies – particularly in the oilfield service space – have posted much-improved operating results,” he said. “As a result, I am seeing a shift toward an increase in sell-side activity for next year.”

Jason Schumacher, at partner at Locke Lord in Dallas, said clients are questioning what the drop in crude oil prices means, which could affect dealmaking. “If it continues to drop at the level it is dropping, we’d predict deals will stall, but it’s a bit too early to evaluate that,” he said.

Winston’s Wynne also noted that energy-focused private equity firms have experienced longer holding periods for their portfolio companies because of the collapse in commodity prices that began at the end of 2014. “As such, these firms need to have liquidity events and are ready to take a few chips off the table,” he said.

Michael Dillard, a partner at Latham & Watkins who led the opening of the firm’s Houston office, said he’s seen a reduction in A&D, or acquisition and divestiture, transactions because they are dependent on commodity prices.

“Currently there is so much volatility that there is a disconnect between the commodity price expectations – and similarly the price of the asset – between buyers and sellers,” he said. “As a result we have seen an increase in deals that don’t make and of failed auction processes.”

Dillard agreed with Wynne, saying one of the biggest issues facing the oil and gas industry is the wall of private equity portfolio companies that need to be monetized.

“With the capital markets closed to IPOs and the A&D market being adversely affected by commodity prices, we believe you are going to see a consolidation of portfolio companies as a way to create companies with sufficient critical mass to access the capital markets, even in the current environment, or to be acquisition targets for larger companies.”

Given the buildout of needed pipelines to transport crude from the Permian to the Gulf Coast, infrastructure service companies may prove to be a hot market on both the buy and sell-side next year, Wynne said. He added that traditional oilfield services-centric private equity firms are testing the waters in downstream service companies in an effort to lessen the volatility caused by commodity price swings.

Bill Swanstrom, co-chair of Locke Lord’s energy practice group in Houston, said what’s impacting crude and gas prices is infrastructure and the need to build it out, so PE-backed companies have jumped into a domain that used to be handled by midstream master limited partnerships, or MLPs, which are challenged right now.

“For most MLPs, the $50-$200M deals are the ones they can handle without having to issue new equity,” he said. “Infrastructure funds are suited for the bigger deals, so these may not get done before year-end because there aren’t a ton of buyers for large midstream assets.”

Unlike the energy sector, which recently has been spooked by lower oil prices, the technology industry is a hotbed of dealmaking and Munsch Hardt Kopf & Harr partner Rob Kibby doesn’t see it slowing down.

“Literally a minute ago, I received another email from a referral looking for help on a sale of a company,” he said. “There’s just so much money out there that’s looking for a home. More deals are also going through a process, with an investment banker hired to shop them, which creates a lot of interest and a lot of work as well.”

On the industrial and manufacturing side, Greenberg Traurig partner Scott Ellis in Dallas said several of his clients don’t seem to have been affected by any industry slowdown.

“There is a little more difficulty getting the debt piece done, as it seems sponsor lenders may be tightening on the credit side, but this challenge has not been insurmountable,” he said. “Going into 2019, companies seem to still be cautiously optimistic as it relates to the ability to get quality deals done and the market generally.”

Amy Curtis, a partner at Thompson & Knight in Dallas said there are several reasons to be optimistic that 2019 will continue to be a busy year for middle-market M&A activity, particularly because tax relief has left buyers with additional cash to spend.

“When it comes to energy M&A in Texas, all eyes will be on commodity prices, as continued volatility could slow planned transactions,” she said. “But generally, the sentiment from executives seems to be that 2019 will bring increased activity for deals.”

Around the country, worries persist about mid-market M&A. In a report released in November, Akerman and PitchBook wondered if the U.S. middle market was losing its “torque,” with transaction activity experiencing a marginal decline in the third quarter on a volume and value basis despite a projected record year for these buyouts.

“[It] raises the question of the extent to which this historically long deal bull run may be getting long in the tooth,” they said.

Akerman and PitchBook project an 11 percent in increase in buyout activity in the U.S. middle market for all of 2018, including a 15 percent jump in deals with enterprise values of less than $200 million.

In Texas, middle market M&A volume peaked in the second quarter of 2014, when businesses in the state were involved in 128 such transactions valued at $14.3 billion, according to Mergermarket. By contrast, there were 83 mid-market deals in the third quarter of 2018 with a value of $9.2 billion.

Meanwhile, middle market M&A values in the state peaked in the fourth quarter of 2014 at almost $15.2 billion spread across 113 transactions.

The yearly peak in middle market deals was in 2014, when 472 deals were announced worth $50.9 billion. The yearly levels have been up and down since then, but mostly down, with only 299 deals worth $36.3 billion announced so far this year. 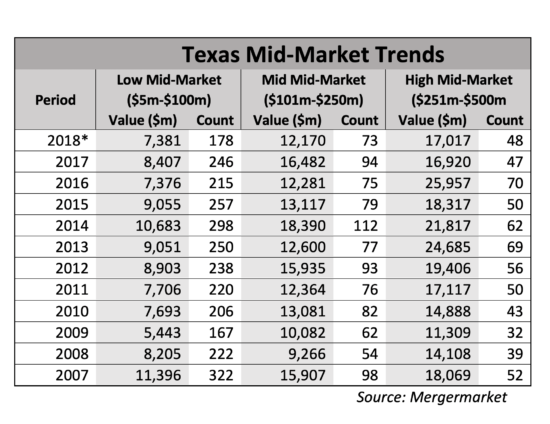 Mergermarket’s Watt points out that the most significant decline has been in the lower middle market. The number of deals this year involving Texas companies valued at between $5 million and $100 million isn’t expected to exceed 200 for the first time since the Great Recession of 2008 and 2009.

There were 178 such lower mid-market transactions during the first 11 months of 2018. Watt predicts only a dozen more will be announced in December and that the final deal count will be about 190 – or about 22 percent fewer than in 2017.

Deal flow may be impacted by higher multiples being paid for middle market companies given the increasing number of private equity firms scouring the country for acquisition targets.

Indeed, Watt said that while deal volume is down, deal value seems to be steady.

“Deal valuations for individual transactions appear to be up modestly,” he says. “That could be because there’s a lot of competition among private equity to find deals worth doing and the price goes up.”