There’s something happening here, and what it is is perfectly clear.

The Texas Lawbook’s 2017 Corporate Deal Tracker results for M&A dealmaking are final. Many of the perennial Texas law firms continue to occupy the top 30 list of legal advisors handling mergers, acquisitions, joint ventures and divestitures, but a realignment is unmistakably underway.

To no one’s surprise, Vinson & Elkins continues its reign at No. 1. Baker Botts, Jones Day, Latham & Watkins, Kirkland & Ellis and Akin Gump are in the top 10.

The news is not positive for all firms. A handful of corporate practices, including Norton Rose Fulbright, Gardere and Baker McKenzie, reported significantly fewer transactions.

One clear trend is evident in the 2017 Corporate Deal Tracker data: Large national law firms moving into Texas are stealing away more and more high-paying legal work on corporate mergers and acquisitions. Until recently, the M&A practice was overwhelmingly the domain of law firms headquartered in Houston, Dallas and Austin.

More than half of the 30 corporate law firms doing the most M&A in Texas are based outside of the state.

Lawyers working in the Texas offices of national law firms handled 374 corporate transactions valued at more than $290.9 billion in 2017, which is more than double the deal count for those law firms in 2015, according to Corporate Deal Tracker data. 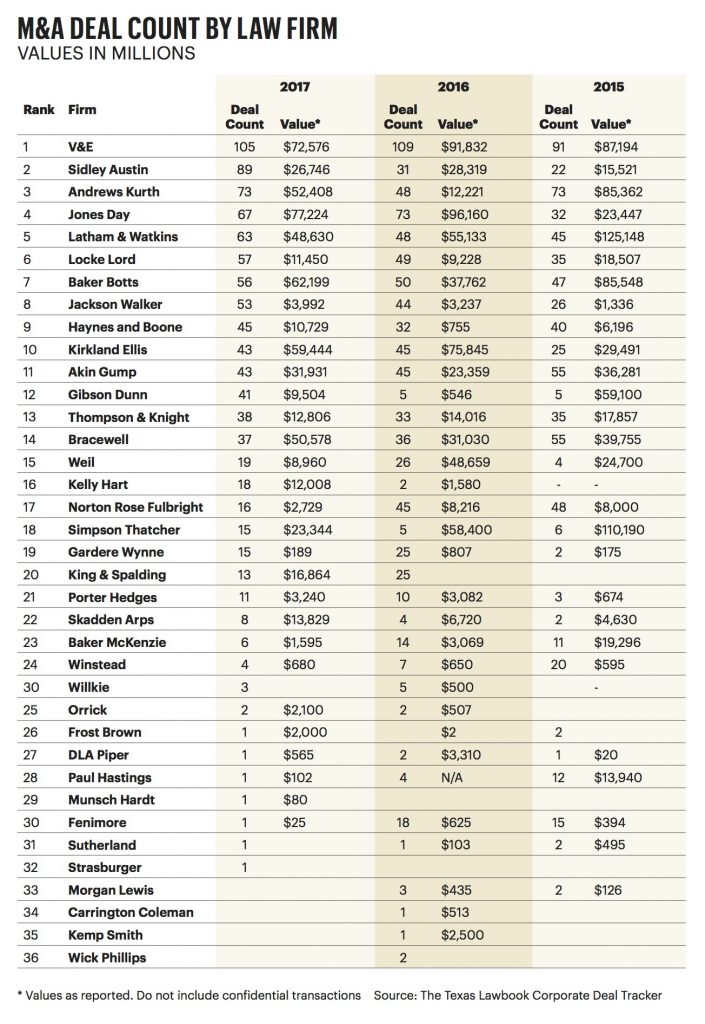 Texas lawyers for Sidley, Latham, Kirkland, Gibson Dunn and Simpson Thacher – five law firms that did not have corporate transactional lawyers practicing in Texas just seven years ago – worked on 251 corporate transactions in 2017 with a combined price tag of $167.7 billion – up from 103 deals in 2015.

The M&A numbers show that the strategy of large national law firms to open or expand operations in Austin, Dallas and Houston by raiding the ranks of Texas legacy firms is having significant success. Corporate general counsel are clearly staying loyal to individual lawyers even when those attorneys jump to new firms.

To be sure, Texas-based law firms are still doing a lot of transactions for their long-term clients.

Lawyers for Houston-based V&E continue to handle by far the most M&A deals in the state, which is the result of the firm’s deep roots and connections in the oil patch and the fact they simply have so many more corporate transactional lawyers in Texas than every other law firm.

The Corporate Deal Tracker shows that V&E lawyers in Texas advised businesses involved in 105 M&A deals in 2017 valued at a combined $72.6 billion. V&E’s deal count is 18 percent higher than any other law firm operating in the state, but it is 4 deals less than the firm handled in 2016.

Baker Botts and Locke Lord are examples of trends in the Texas legal market. Both firms actually increased the amount of M&A their Texas lawyers handled in 2017, but both dropped in the rankings because out-of-state firms grew faster.

But Baker Botts dropped from third in 2016 in the Corporate Deal Tracker rankings to seventh in 2017, while Locke Lord went from fourth to sixth place.

Texas lawyers for Jackson Walker and Haynes and Boone increased their deal count numbers and moved up in the Corporate Deal Tracker rankings. Jackson Walker, which has no offices outside of Texas, worked on 53 corporate transactions in 2017 – a 20 percent jump from a year earlier. Haynes and Boone increased its M&A deals from 32 in 2016 to 45 in 2017.

By far the biggest surprise in the Corporate Deal Tracker 2017 law firm numbers belongs to Sidley, which has emerged as a serious challenger to V&E for the top spot. Sidley lawyers in Texas worked on 89 deals valued at $26.7 billion – up from 31 transactions in 2016, a 220-percent increase. Sidley, it should be noted, poached five deal attorneys from Andrews Kurth Kenyon last year and have stolen more than a dozen corporate lawyers from Weil, V&E and Akin Gump during the past few years.

Jones Day claimed the top spot for deal value in 2017. The global law firm handled 66 transactions worth $77.2 billion. Jones Day partner Alain Dermarkar of Dallas represented Reynolds American on its $49 billion sale to British American Tobacco in January 2017, which was the largest transaction led by a Texas-based lawyer last year.

Los Angeles-founded Gibson Dunn, which boosted its ranks last year by hiring six deal attorneys from Baker Botts in Houston, jumped from five deals in 2016 to 41 transactions valued at $9.5 billion last year, according to the Corporate Deal Tracker.

Latham lawyers in Houston also posted a fantastic M&A year. Latham, another firm founded in Los Angeles, increased its 2017 deal count by 31 percent, from 48 transactions to 63.

There are multiple explanations for dramatic increases in M&A activity by certain law firms – ranging from a healthy deal market in Texas and companies hiring multiple law firms to handle complex transactions to more aggressive reporting of transactions by the law firms to the Corporate Deal Tracker.

The trend of national law firms advising in a growing number of deals is confirmed by new separate data by Mergermarket provided exclusively to The Texas Lawbook.

Kirkland also became the first non-Texas firm in 2017 to be number one in Mergermarket’s annual M&A rankings of firms representing Texas businesses in M&A activity. Mergermarket, which collects its data separately, showed Kirkland advised Texas companies in 82 deals last year. V&E was second with 68 and Latham came in third with 55.