(Jan. 3) – For the second year in a row, bankruptcies involving Texas-based companies significantly increased in 2016 – though the number of new filings slowed considerably during the final five months of the year.

Legal and financial advisers say there are still dozens of oil and gas companies that are on the verge of insolvency and that another drop in commodity prices will lead to another wave of corporate bankruptcy filings.

Some financial restructuring experts say the next round of business bankruptcies may extend far beyond the energy sector.

“There is new underlying data showing that smaller and mid-sized businesses are facing some serious turmoil in the months ahead,” says William Snyder of Dallas-based CR3 Partners, a corporate turnaround management firm.

“We are starting to see significant distress in casual dining and trucking sectors,” Snyder says. “Every major downturn has precursors, and these are two bad warning signs.” 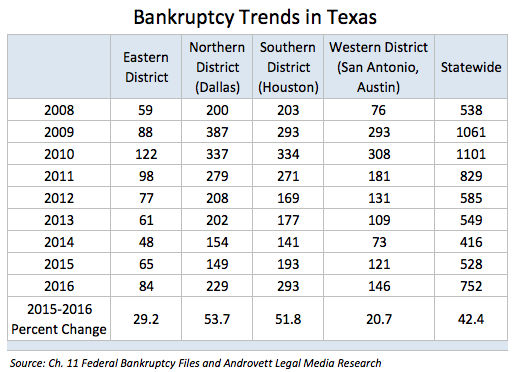 New research by Androvett Legal Media shows that 752 businesses filed for bankruptcy restructuring in Texas federal courts in 2016 – up 42 percent from 2015 and up 80 percent from 2014.

“Energy has been the dominant theme – lots of upstream, some midstream and some oil and gas services companies,” says Vinson & Elkins partner Bill Wallander, who leads the firm’s reorganization and restructuring practice. “We’ve also started seeing an uptick in bankruptcy filings by tech companies, retailers and some manufacturing.”

The data demonstrates a clear connection between bankruptcy activity in Texas and the financial health in the oil patch.

New business bankruptcies filed in the Western District of Texas increased by 100 percent during the past two years – from 73 in 2014 to 146 in 2016, according to the Androvett study. The jump was even bigger in the Southern District, where 293 companies filed for Chapter 11 bankruptcy protection in 2016 – up from 141 in 2014.

The Northern District also witnessed a 49 percent escalation in corporate bankruptcies from 2014 to 2016. Business restructurings in the Eastern District climbed 75 percent during the past two years.

More than 150 oil and gas companies filed for bankruptcy in 2016 – 71 of them were exploration and production operations with a cumulative debt of $56.8 billion, according to Haynes and Boone’s Oil and Gas Bankruptcy Monitor.

“We are not seeing the wave of E&P bankruptcies that we witnessed earlier, but there is still a lot of distress out there, and there’s still a lot of first lien debt that is non-performing,” says Thompson & Knight partner Tye Hancock, who specializes in oil and gas bankruptcy.

“A lot of it depends on where the assets are located,” Hancock says. “The cost of performing in North Dakota is a lot more than in the Permian Basin.”

When Houston-based Stone Energy sought Chapter 11 protection on Dec. 14, it was the 114th E&P company to declare bankruptcy. The total debt: $74.2 billion. More than 110 oil and gas service companies with a cumulative debt of $18.8 billion have filed. The 16 midstream firms that are in bankruptcy have a combined debt of $17.2 billion.

“There are still several large oil and gas companies out there that may still be forced to file Chapter 11,” says Norton Rose Fulbright partner Lou Strubeck, who is widely considered one of the leading bankruptcy lawyers in the U.S.

Strubeck says there are many energy companies – especially those in oil and gas services – who have narrowly escaped bankruptcy thanks to a banking practice known as “extend and pretend.” With interest rates low, many banks have decided to simply extend loans instead of requiring companies to rebalance their financials through bankruptcy restructuring.

“If commodity prices drop again and interest rates continue to go up, many of those service companies on the precipice will be forced to file,” he says.

“If the OPEC agreement [to produce less oil] falls apart, there is a real risk that oil prices could fall back into the $30s and that would almost certainly trigger a second rash of bankruptcy filings,” says Mark Sherrill, a bankruptcy partner at Sutherland Asbill & Brennan in Houston.

Overall, about half of the oil and gas companies filed in Texas, while 31 of the 240 energy firms chose Delaware to litigate their restructuring.

“Oil and gas is an industry that has highs and lows,” says Jackson Walker bankruptcy partner Bruce Ruzinsky. “The temptation in the oil and gas business is to catch the wave when things are blowing and going.

“This downturn has been more difficult than past ones because it has gone on longer and prices went lower than people expected,” Ruzinsky says.

Strubeck and others say bankruptcy experts also are watching the commercial real estate, shipping, retail and restaurant sectors for financial turmoil in 2017.

“Retail businesses continue to fall victim to Amazon and other online competitors,” says Daniel Winikka, a partner at Loewinsohn Flegle Deary Simon in Dallas. “Restaurant chains are seeing many of their locations becoming unprofitable. Some will restructure outside of bankruptcy but many need the help of bankruptcy court to escape onerous contracts and leases.

“There is a lot of corporate restructuring going on privately,” Winikka says.