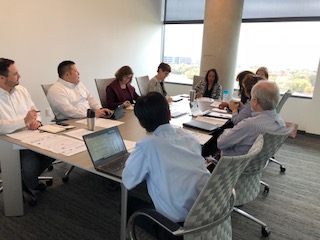 The corporate legal department at Toyota Motor North America has a message to the Texas legal profession about diversity: Let’s actually go places.

For two decades, corporate law firms across Texas professed their desire to diversify their ranks. They created women’s initiatives and diversity task forces. They implemented efforts designed to recruit, retain and promote more women and minorities as lawyers. Sadly, the needle barely moved.

But serious advocates for diversity in the legal profession say there is now a movement gaining steam that they believe will finally force corporate law firms to take diversity seriously. The force for change is the corporate in-house legal department, also known as the client.

No corporate legal department is pushing more forcefully, trying to be more creative and making a bigger difference than at Toyota.

Since relocating its U.S. headquarters to Plano two years ago, the 54 in-house counsel at Toyota have implemented a diversity protocol that many legal industry analysts say is among the most aggressive in Texas. And it is already witnessing success.

“The Toyota legal department has turned the diversity issue on its head and they are getting results,” said Baker Botts partner Christa Sanford. “Toyota is affecting change at outside law firms because outside counsel knows that Toyota requires them to do so if they want Toyota as a client.”

The Toyota legal department’s diversity program, despite being only a few years old, is already getting recognized as cutting edge. The Texas General Counsel Forum, an organization of more than 600 leading chief legal officers across the state, is awarding Toyota its prestigious Magna Stella Award at next week’s annual meeting in Austin.

Toyota Chief Legal Officer Sandra Phillips Rogers told The Texas Lawbook that it “is a true honor” to be recognized for efforts.

“Diversity and inclusion lie at the heart of Toyota’s evolution as a mobility company,” Rogers said. “It’s important to us that our company and legal department reflect the diversity of the marketplace we serve, and we deeply value having diverse team members and business partners with a broad range of perspectives at the table.”

The issue of diversity is personal for Rogers. A graduate of the University of Texas School of Law, Rogers is a founding member of the Center for Women in Law at UT. As a former partner at Morgan, Lewis & Bockius and Shook, Hardy & Bacon, she understands the internal struggles corporate law firms have in their diversity efforts.

“From the get-go, Sandra focused on diversity,” Sanford said. “She and the lawyers at Toyota understand that legal departments can lead and make changes. Some legal departments promote diversity, but if you look behind the curtain, their numbers are not that great.

“That is not the case at Toyota,” she said. “They live what they preach.”

About 80 percent of the in-house lawyers at Toyota moved from California to North Texas when the automaker relocated its headquarters to Plano two years ago. Three-fifths of the 52 Toyota attorneys are women, while 40 percent are lawyers of color.

“We were deliberate and intentional in building our legal team,” Toyota deputy general counsel Ellen Farrell told The Texas Lawbook. “Ultimately, we want to achieve diversity in the legal profession as a whole.

“When you think about how the law touches society, it is very broad,” Farrell said. “You get the best ideas when you have more diverse viewpoints.”

Known internally and by outside counsel as Toyota Legal One, the automaker’s American-based legal team developed a comprehensive effort related to outside counsel in 2014 called the Partnering Program.

Led by Farrell, the Partnering Program governs TL1’s relationship with 60 preferred law firms across the U.S. These 60 firms are those who do the bulk of the outside legal work for Toyota.

“The Partnering Program is an opportunity for us to engage with our top outside law firms to get high quality legal services at a good cost,” she said. “The goal is to develop a true dialogue.”

Diversity and inclusion are priorities of the program, said Farrell, who went to college at Rice University, worked as a certified public accountant in Houston and is now a 19-year veteran of the Toyota legal department.

Toyota instructs its outside counsel handling its matters to track diversity and inclusion metrics, which the TL1 legal team monitors through its e-billing system.

Using its metrics, Toyota follows how much of the company’s legal work outside law firms give to lawyers who identify themselves as women, lawyers of color, LGBT, veterans and those with disabilities.

So far this year, 51 percent of Toyota’s legal spend through its Partnering Program went to lawyers who were identified as diverse timekeepers. TL1 also insists that law firm partners leading the relationship with Toyota be diverse.

“Every quarter, TL1 hosts a webinar or program and they get their outside law firm partners to talk with each other about what diversity and inclusion efforts they are doing and what works,” Sanford said.

The objective of the discussions, according to Sanford and Farrell, is to have law firm leaders put aside competitive natures in order to identify solutions.

For example, Farrell said there are some solutions to the pipeline issue.

“Large law firms refuse to recruit from certain law schools and they recruit only from the top 10 in the class,” she said. “Our advice is to broaden the scope of their recruiting and include more law schools.”

Farrell said that a student from UNT Dallas College of Law interned with the Toyota legal department this past summer.

“She was great,” she said. “I don’t know how many law firms are recruiting at UNT, but they should.”

“We ask our firms to bring young lawyers of color and diversity to meetings with us,” she said. “We will share in the costs if the firm will take care of some of the costs. Truthfully, the younger associates need to assume some of the costs, too, because this is their professional development. It is an investment in their future.

“If we are going to make real progress with diversity and inclusion in the legal profession, it is going to take intentional and deliberate focus and action,” Farrell said.

With that attitude toward diversity, the corporate legal profession could actually go places.