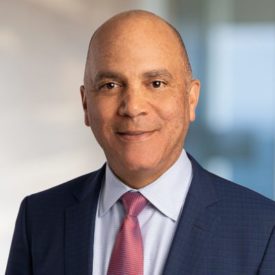 Texas’ system of selecting judges by partisan elections and campaign fundraising is fraught with problems and ought to be changed. That is the opinion of the current and past chief justices of Texas, as well as the findings of a statewide blue-ribbon commission. What are the chances that Texas sees substantive judicial elections reforms? The two chiefs and two prominent trial lawyers – David Beck and Chip Babcock – have the answer.

162nd District Court: A Popular Incumbent Versus a Conservative Challenger

In the race for judge of the 14th District Court in Dallas County, incumbent Democrat Eric V. Moyé is being challenged by Republican Jessica Voyce Lewis, who is running for office for the first time. Moyé has held the seat since 2008.

The race for judge of the 215th District Court in Harris County is a rematch from 2016. Republican Fred Shuchart, an insurance defense lawyer and shareholder in the Houston office of Cooper & Scully, is challenging the incumbent judge, Democrat Elaine H. Palmer.

The race for Dallas’ 95th District Court pits Republican Mike Lee against Democrat Monica Purdy. Both have significant experience but in different regards. This Q&A with both candidates explains more.

The race for the 164th district court features incumbent Michael Landrum, a mediator and arbitrator from Clark Hill Strasburger, against Cheryl Elliott Thornton, a senior assistant attorney for Harris County who is passionate about public service.

The race in Harris County pits incumbent Ursula Hall against Bruce Bain, a litigator and mediator who worked in the White House under President George H.W. Bush.

Busby and Triana Square off in Race for SCOTX Place 8

In the Place 8 race for the Supreme Court of Texas, incumbent Republican Brett Busby, the second-newest member of the court, faces Democrat Gisela Triana, a justice on the Third Court of Appeals, which is headquartered in Austin and hears of cases from 24 Central Texas counties.