The business of corporate law in Texas for 2017 can be best described in two statements: Rich law firms got much richer, and the rest of the law firms scrambled for survival.

The Houston office of Kirkland, which only opened in 2014, generated $187 million last year, making it the 11th largest legal operation in Texas.

Over all, the 50 largest corporate law firms operating in Texas essentially employed about the same number of lawyers that they did in 2016, but they made much more money.

Exclusive research by The Texas Lawbook found that the 50 largest corporate legal practices in Texas generated $5.65 billion in revenues from their lawyers who office in the state – a 2.4 percent increase from 2016.

The data shows that the national law firms that moved into Texas during the past few years continue to steal lawyers and revenue from Texas legacy law firms.

The Texas Lawbook analysis of the exclusive data shows that:

The Texas Lawbook surveyed the 50 law firms with the largest operations in Texas. Nearly all of the firms provided their financial data. A handful did not, but The Lawbook obtained revenue estimates on those law firms from legal industry consultants or recently departed partners of those law firms.

Battle for Talent and Treasure

“We had a truly fabulous year – a record year,” said V&E Chairman Mark Kelly. “Demand was up, which was good. We have 112 summer associates coming in. So, we are ramping up for another great year and for expansion.”

While national law firms have raided V&E for scores of lawyers during the past seven years, legal industry analysts say that V&E has also benefited from the national invasion in one simple way: the elite national law firms with dramatically higher rates provided cover to V&E to significantly increase the rates it charges clients.

Most Texas-based law firms decided to use their lower hourly rates as a marketing tool to retain business. But V&E, according to legal consultants, took the opposite approach.

For the most part, Kelly agreed.

“The challenge for law firms is attracting and keeping the best legal talent,” he said. “For law firms with revenues less than $1 million per lawyer, it will be tough for them to compete. We want the high-end work and that means top talent.

“In this competitive environment, you cannot be caught flat-footed or you will get run over,” Kelly said.

Baker Botts, which claimed the No. 1 spot for revenue in 2016 on the back of a large contingency fee payment, had $378 million in 2017 revenues for its Texas offices – an 18.1 percent decline from a year earlier.

Haynes and Boone and Jackson Walker are two Texas-based law firms that increased their lawyer head count and their revenues at their Texas offices.

“2017 was our best year ever,” said Haynes and Boone managing partner Tim Powers. “We saw strong performances across the board and we benefited from our clients doing some really great things.

“We are cautiously optimistic about 2018,” Powers said. “The tax reform law will hopefully drive significant investment in Texas and infrastructure legislation could mean good work in the next year. But a trade war could have a devastating impact.”

(Editor’s Note: The Texas Lawbook will publish an in-depth report this Friday detailing the financial data of the Texas-based law firms and two global powerhouses that have roots in Texas, Akin Gump and Norton Rose Fulbright.)

Thirteen law firms have seen their revenues in Texas grow by 20 percent or more from 2015 to 2017. All but one – Gray Reed – is headquartered outside the state.

“Based on just about any metric, we are experiencing extraordinary success,” said Robert Rabalais, who is managing partner of Simpson Thacher’s Houston office. “Houston has been the most productive and most profitable office on a per-lawyer basis of any office at the firm.

“Firm leadership has directed me to grow the Houston office and is making a substantial investment here,” Rabalais said. “We are beefing up our capital markets and fund formations practices. We are building out new office space to potentially double the practice here.”

Baker McKenzie, Holland & Knight, Mayer Brown, McGuire Woods, Alston & Bird and Polsinelli have all increased revenues by 20 percent or more since 2015. Two other law firms – Orrick and Reed Smith – did not have Texas offices in 2015. Reed Smith had $54.1 million in revenues from its Texas operation in 2017 and Orrick had $40.4 million.

Coming Friday: Texas-based law firms are fighting for survival. Some are doubling down at home, while others are expanding beyond the Lone Star State. Some are looking for merger partners. Others are building walls, or at least fences.

Coming Monday: For decades, three Chicago law firms – Kirkland & Ellis, Sidley Austin and Winston & Strawn battled in their hometown for supremacy. Then, they duked it out in New York and Washington, D.C. Now, they have brought their fight to Texas. All three firms are paying big bucks, luring major talent and generating record profits in Dallas and Houston. 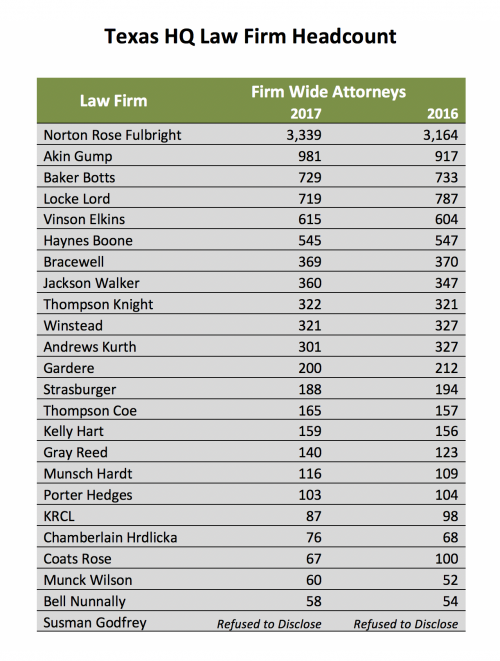 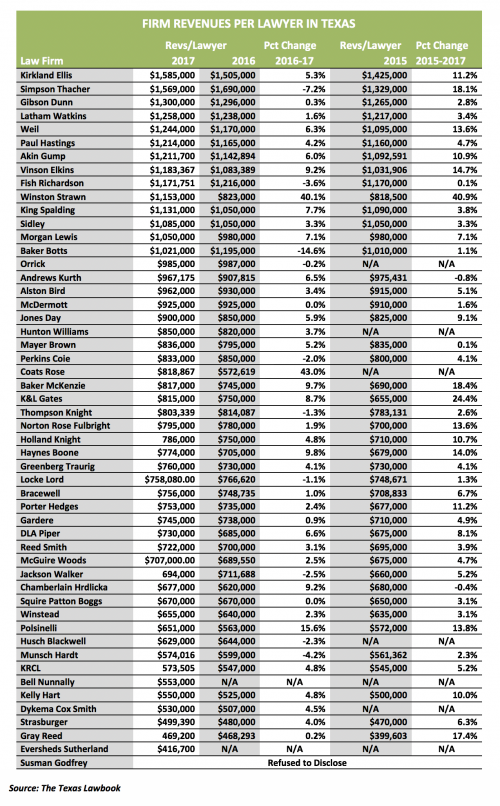