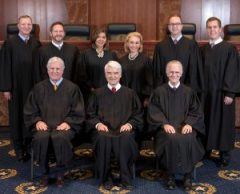 A 2010 column in The Dallas Morning News may have been “callous,” may have left out key facts and may have even portrayed a North Texas family of being deceptive about the death of their teenaged son, but the article was an “opinion” piece that was “literally true” and thus not a breach of defamation laws in Texas, the Texas Supreme Court ruled unanimously Friday.

The state’s highest court, in a pair of opinions still being examined and analyzed for their impact by First Amendment and media law experts, rejected claims by John and Mary Ann Tatum that former Dallas Morning News Metro columnist Steve Blow published false and defamatory information about them and their son’s obituary.

The Tatums claimed that Blow defamed them by “gist” when he wrote that the couple’s paid obituary deceptively called their son’s death the result of a car accident when in fact he committed suicide.

Court records show that the Tatum’s 17-year-old son was involved in a car crash. Hours later at home, the teenager started drinking heavily and then shot himself. The Tatum’s purchased an obituary that stated that their son died “as the result of injuries sustained in an automobile accident.”

A few weeks later, Blow penned a column under the headline, “Shrouding Suicide Leaves Its Danger Unaddressed.” The column noted that the obituary failed to mention that Tatum killed himself.

“The secrecy surrounding suicide leaves us greatly underestimating the danger there,” Blow wrote. “Averting our eyes from the reality of suicide only puts more lives at risk… We don’t talk about the illness that often underlies it—mental illness.”

At the end of the column, Blow wrote that the lack of openness is understandable, but people should not feel embarrassed by suicide.

“The last thing I want to do is put guilt on the family of suicide victims,” he wrote.

The Tatums felt Blow had defamed them by saying their obituary was deceptive and they sued. The trial court dismissed the case. The court of appeals reversed and ordered that the facts go to trial. Lawyers for The Dallas Morning News appealed to the Texas Supreme Court. Former Supreme Court Chief Justice Wallace Jefferson argued the case for the DMN.

“However, as we further conclude that the accusation is an opinion,” Justice Brown wrote in the 41-page opinion. “The statement is literally true because the Tatums’ obituary is deceptive. It leads readers to believe something that is not true. It states that Paul died from injuries arising from a car accident when in fact Paul committed suicide.

“We conclude that the column is literally true. And even if the statement is not literally true, it is substantially true because it is no more damaging to the Tatums’ reputation than a truthful column would have been.”

Paul Watler, a media law partner at Jackson Walker and lawyer who frequently represents The Dallas Morning News, said the news organization is “glad to close the book on this lawsuit.”

“Justice Brown’s scholarly opinion is noteworthy in many regards,” Watler said. “It surveys and explains libel law in a way that will be instructive for lawyers and judges in Texas for many years to come.

“Justice Brown’s opinion is thoroughly grounded in the guarantee of free speech and free press that is enshrined in both the First Amendment and the Texas Constitution,” Watler said. “The opinion weaves together many strands of libel law from Texas cases during the past couple of decades. The court uses new labels for some old concepts in a few instances while restating existing law in the field.”

Justice Jeff Boyd authored a concurring opinion that supports Judge Brown’s conclusion but states that a significant portion of it – especially the development of new labels for old concepts – is unnecessary.

“The Court is writing on a cluttered slate,” said Justice Boyd, who was joined in his opinion by Justice Debra Lehrmann and Justice Jimmy Blacklock “But its effort to advance the law by introducing new terminology and addressing concepts unnecessary to this decision only makes things worse.

“The question in this case is pretty simple: For summary-judgment purposes, was Blow’s column reasonably capable of a defamatory meaning? We need not – and the Court does not – announce any new substantive legal principles to decide that issue,” Justice Boyd wrote. “Applying (but renaming) existing principles, the Court concludes the column was reasonably capable of conveying the meaning that the Tatums published a deceptive obituary, which is defamatory, but not that their son had a mental illness or that the Tatums exacerbated the problem of suicide.

“The answer certainly requires consideration of the column’s implications and gists, and perhaps those are necessarily complicated matters,” Justice Boyd wrote. “But if nothing else, the Court need not rewrite and re-label existing considerations.”