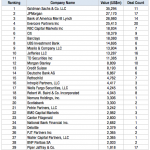 The bulge-bracket banks that normally rank at the top of the financial adviser league tables nationally are getting some new and fierce competition in the Lone Star State. The Texas Lawbook has exclusive Mergermarket data with the top 30 financial advisers involved in Texas-based M&A.

Baker Botts, Vinson & Elkins Advise on QEP Transaction That Was in Doubt

Some thought QEP’s $740 million divestiture deal might not happen. But lawyers in Dallas, Houston and Austin saw it through. Details are in The Texas Lawbook.

How will M&A activity shape up in the second half of the year? The Texas Lawbook interviewed nearly a dozen of the leading corporate and private equity lawyers in the state to gauge their view on the M&A market for the first half of 2017 and what they forecast for the remainder of the year. This is their analysis.

Merger and acquisition activity among Texas-based businesses remained healthy during the first half of 2017, but far from the exuberant pace of dealmaking in 2014. Deal count has been flat, but deal value is up significantly over 2016, fueled by steady oil and gas M&A and Whole Foods’ sale to Amazon. The Texas Lawbook has the exclusive data from Mergermarket, along with a list of the 30 biggest deals during the first six months of 2017.