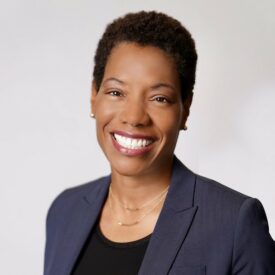 Dallas District Judge Tonya Parker announced Monday that she intends to seek election to an upcoming opening on the Fifth Court of Appeals in Dallas.

Judge Parker, a widely respected trial judge who consistently ranks among the top three judges for judicial temperament and legal knowledge by Dallas Bar Association members, sent an email to supporters stating that she has been “seriously considering a run for court of appeals” for some time.

This edition of Litigation Roundup features a dispute over unlicensed use of a viral video in which a Chevrolet pickup truck drove through a tornado, a claim that the Department of Education’s loan forgiveness program violates the Administrative Procedure Act and a shareholder derivative lawsuit against Energy Transfer.

Nearly half of those summoned fail to show, leaving courts scrambling to meet a backlog of jury trials, a Texas judicial system official tells a legislative committee. The committee chair vows to elevate policies next session to promote jury service.

In this week’s edition of Litigation Roundup, a settlement nears in a patent dispute over Formula One racing safety technology, a Texas lawyer takes his fight with a California wine entrepreneur to the Texas Supreme Court and a former NFL Pro Bowl cornerback blames a Houston-area clinic for a failed drug test. 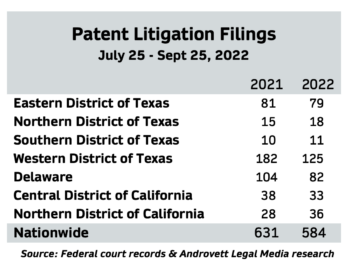 In the 10 weeks since the chief judge of WDTX stunned the patent litigation bar by ordering that new patent infringement lawsuits filed in Waco be evenly divided among the district’s 11 federal trial judges instead of assigned solely to Judge Alan Albright, new cases have dropped significantly. New research shows the WDTX is still getting the most new patent lawsuits. Judge Albright still got five times more new cases than any other Western District judge. But IP law experts say the raw data is deceiving and that more data points are needed, including two nine-digit-dollar verdicts during the past three weeks.

Former NBA All-Star Jermaine O’Neal filed a lawsuit in Dallas County District Court on Monday against the Dallas-Fort Worth International Airport on behalf of his company Drive Nation. The lawsuit alleges O’Neal put $14 million of his own money to finance the construction of the sports complex based on promises from airport officials that the surrounding land would be developed.

In this week’s edition of Litigation Roundup, the San Antonio Spurs beat back a lawsuit alleging it infringed two ticket sales technology patents, the SEC pursues a Texas duo in a $12 million Ponzi scheme suit, and the Texas Supreme Court gears up to hear a case involving the intersection of public information and attorney-client privilege.

After three decades of leading a boutique litigation firm, Alan Loewinsohn is reuniting with old friends and colleagues Mike McKool and Doug Cawley at McKool Smith. He is being joined by two colleagues from his prior firm.

In a federal lawsuit filed in the Western District of Texas Wednesday afternoon, gun maker Daniel Defense, communications company Motorola Solutions and Schneider Electric, which made and installed door locks at Robb Elementary, all were named as defendants. The suit is seeking unspecified damages to include punitive damages.