(June 21) – New patent infringement lawsuits filed in federal courts in East Texas declined by nearly half during the first six months of 2016 – a sign that multiple efforts to curb complaints by so-called patent trolls are possibly having an impact.

The new data shows that while the number of lawsuits alleging patent violations may have peaked in 2015, the Tyler-based Eastern District of Texas continues to be by far the most popular place in the U.S. to sue for intellectual property infringement. 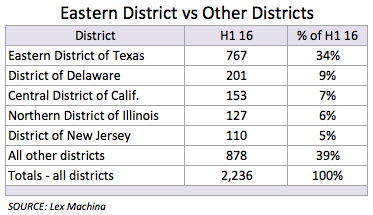 Businesses and individuals filed 767 patent cases in East Texas federal courts during the first half of this year – a 45 percent drop from the record 1,389 complaints filed during the same period in 2015, according to legal analytics provider Lex Machina.

New infringement lawsuits also dropped significantly in the Northern and Western Districts of Texas. There were 63 patent cases filed in North Texas during the first six months of 2015, compared to 31 such cases this year. In West Texas, patent suits went from 48 in the first half of 2015 to only 13 so far in 2016, Lex Machina reports.

“The drop in filings in the first and second quarters of this year suggest that we may be looking at more than just a glitch and we may see a continued decline in patent litigation filings the rest of this year,” said Dustin Edwards, a partner in the Houston office of Winston & Strawn.

More than one-third of all patent lawsuits brought in the U.S. during the first six months of 2016 were filed in East Texas, which compares to second place Delaware’s 9 percent, according to Lex Machina.

But some legal experts believe that the number of new patent cases will continue to decline because corporate defendants now have new weapons in their arsenals to squash lawsuits. In addition, federal judges recently demonstrated that they will slap plaintiffs who file frivolous cases with six-digit fines.

New tools for defendants include a U.S. Supreme Court ruling from June 2014 in Alice vs. CLS Bank, along with the U.S. Patent and Trademark Office’s 2012 launch of an administrative arm for challenging patents, the Patent Trial and Appeal Board, or PTAB for short.

Defendants in patent suits can ask judges to put the proceedings on hold while they challenge the plaintiffs’ patents at PTAB.

“The kinds of patents these [holding companies] have sometimes are of lower quality and subject to legal attack, especially in the field of software patents,” Melsheimer said. “I think you are seeing fewer filings because the companies that own such patents don’t see any economic advantage in litigation. Traditional competitor-to-competitor cases have not seen a significant decline in the Eastern District.”

Last November, patent owners rushed to the federal courthouse in East Texas to avoid heightened pleading standards that went into effect Dec. 1. There were other surges earlier last year when it was rumored that Congress was considering possible patent reform, and again when the Federal Circuit Court of Appeals was considering a case that some feared could limit the venues where plaintiffs could sue.

The net result, according to lawyers, could be that patent owners emptied their magazines for a while.

“The Eastern District judges have earned a reputation for devoting the time and attention needed to move these cases forward, and that’s a strong incentive for plaintiffs to continue filing there,” said Eric Pinker, a Dallas-based partner at Lynn Pinker Cox & Hurst. “People have been predicting the decline of patent litigation in the Eastern District for many years, and that prediction has been consistently wrong.”

The question, rather, is whether the patent bar may have already witnessed a peak in the “troll” phenomenon that drove East Texas’ infringement docket to record highs in recent years.

In a March interview, Lex Machina Chief Evangelist and General Counsel Owen Byrd noted that the general counsel of a large Silicon Valley technology powerhouse told him that the company had learned how to respond to patent-assertion entities.

Many of the highest quality patents in the patent-assertion sector have already been enforced, and the tech company had become nimble about using patent-killing tools like Alice and PTAB when responding to trolls, the GC told Byrd.

“It’s not over,” Byrd said of the litigation frenzy that trolls have helped foster. “But now, things seem a little different.”

In Alice, the Supreme Court ruled patents invalid if they cover the implementation of an “abstract idea” on a “general purpose computer.”

An abstract idea is not patentable under section 101 of the U.S. Patent Act. Critics have noted that the Supreme Court has refused to define “abstract” for the purposes of determining whether a patent is valid.

Still, lawyers say, the result of the Alice ruling has been a surge in attempts by defendants nationwide to use the ruling to kill plaintiffs’ patents.

Between 2008 and 2013, defendants nationwide made a total of 101 motions to kill patents under section 101, according to a March presentation from Pillsbury Winthrop Shaw Pittman that cited DocketNavigator. That is an average of less than 17 per year.

Motions under section 101 surged to 88 the year Alice came out, and to 289 last year, the Pillsbury Winthrop presentation shows.

Judges have granted the section 101 motions in large numbers since Alice, giving the green light on almost 70 percent of challenges under that ruling last year, according to McDonnell Boehnen Hulbert & Berghoff.

Although lawyers say Alice has resulted in mass confusion about what is patentable under U.S. law, some caution against reading too much into data on invalidity rulings based on that decision.

It is possible, for instance, that the high grant rate of Alice challenges reflects defendants going after patents that were susceptible to section 101 motions in the first place, attorneys at Finnegan, Henderson, Farabow, Garrett & Dunner noted last fall.

The reality of Alice’s impact at PTAB is also somewhat murky, largely because 101-based petitions make up a small fraction of all challenges that PTAB fields.

And while PTAB’s administrative judges have a reputation in some quarters as a Murderers’ Row of patent killers, the data shows the reality is more complex.

Still, the prospect of seeing claims on their patents invalidated at PTAB has given pause to many businesses that enforce patents for a living, Melsheimer said.

“A PTAB review often results in any pending court case being stayed,” he said. “The threat of going through such a review is another reason why patent holders are backing off when it comes to filing lawsuits.”

In addition to Alice and PTAB, other issues have surfaced for businesses that focus on enforcing patents.

Energy companies in particular are less tempting targets because of the impact of the downturn in that industry, according to David Levy, a Houston-based partner at Morgan Lewis & Bockius.

“As the oil and gas market continues to suffer, there is less incentive for patent holders to sue,” he said. “So [enforcement businesses] that were previously targeting the energy industry are probably taking a wait-and-see approach.”

In addition, plaintiffs that sue large numbers of defendants took note last December when U.S. District Judge Rodney Gilstrap of Marshall ordered a Plano-based business, eDekka, to pay a total of $390,000 in attorneys’ fees for various defendants in 168 infringement suits.

“There are benefits to litigating in a forum with judges experienced in patent matters, well-developed case law and predictable procedures,” said Thom Tarnay, a partner who heads the Dallas intellectual property group at Sidley Austin, which was not involved in the eDekka case.

“People increasingly realize that defendants do win cases in the Eastern District, including big cases such as what our firm has won,” Tarnay said.

While there is never a shortage of reasons to fight over patents, some of the high-growth battlefields are not in Texas.

For example, federal courts in Delaware and New Jersey are more popular for patent disputes involving pharmaceuticals because that’s where many large drug companies are based.

Between 2009 and 2015, no judicial district in Texas ranked among the top 10 nationwide for handling litigation related to Abbreviated New Drug Applications, or ANDA, submitted to federal regulators under the federal Hatch-Waxman Act, Lex Machina says.

Another popular spot to slug out patent battles is at the U.S. International Trade Commission, which is based in Washington, D.C. Owners of patents can use the ITC to land bans on imports of products that infringe U.S. patents.

“While expensive and time consuming, it provides quick and powerful relief – notably injunctions on importation – while avoiding stays and the risks presented by inter partes review at the PTAB,” Levy said.