The Texas Lawbook has released its exclusive Corporate Deal Tracker M&A law firm rankings for Jan. 1 through Sept. 30. The mission is to document transactional work done by lawyers in the Lone Star state. 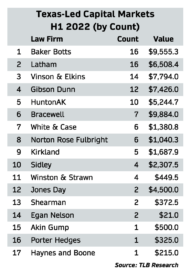 During a down year for the capital markets practice in Texas, a handful of law firms stayed busy. None were busier than the lawyers at Baker Botts. Latham, V&E, Gibson Dunn, Hunton AK and Bracewell also had impressive showings for the first six months of 2022, according to The Texas Lawbook’s exclusive Corporate Deal Tracker, which tracks securities offerings handled by lawyers in Texas.Updated

Forty-four corporate law firms with offices in Texas reported that their lawyers in Texas played a substantive role in representing buyers, sellers, targets, conflicts committees, financial institutions and other third parties in various kinds of transactions in which assets were bought, sold or merged. A handful of elite law firms – Sidley, Kirkland, V&E, Latham, Gibson Dunn, to name a few – topped The Texas Lawbook’s exclusive Corporate Deal Tracker law firm rankings for the first half of 2022.

Several Texas-headquartered corporate firms also experienced a strong six months, including Haynes and Boone, Baker Botts, Akin Gump and Locke Lord. Four law firms had Texas lawyers who worked on nearly three-quarters of all the transactions that had deal values of $500 million or more.

The first half of the year in Texas M&A was dominated by the mid- to lower-market transactions, according to data gathered by The Texas Lawbook Corporate Deal Tracker. Although dealmaking was robust, the values of those deals declined dramatically. Of 507 deals reported by Texas lawyers, only a handful were valued at $5 billion or more, and deals valued at more than $1 billion declined dramatically from 2021. On the other hand, deals valued under $100 million help push the year’s deal counts to impressive levels. The Texas Lawbook has the details. 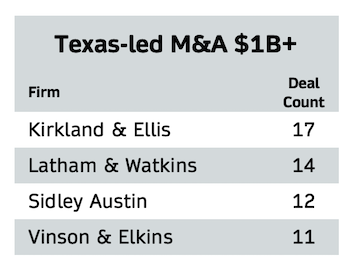 The battle among Texas lawyers to do the mega mergers, acquisitions and joint ventures is fierce. The Texas offices of 22 law firms represented parties in 115 M&A deals that were valued at $1 billion or more in 2021, according to The Texas Lawbook’s Corporate Deal Tracker. Seven different law firms had Texas lawyers advise on 10 or more of those billion-dollar corporate transactions.

Texas lawyers feasted on mergers and acquisitions in 2021. The Texas offices of Kirkland & Ellis did the most deals — though Sidley, Vinson & Elkins and Latham & Watkins were crazy busy. The Texas Lawbook‘s Corporate Deal Tracker lists the law firms that were involved in a record-smashing 929 corporate deals last year and the dealmakers who led those transactions.

Correction:The Texas Lawbook, in an earlier version of this article, undercounted the deal count and deal value for Gibson Dunn, Haynes and Boone and Locke Lord. We apologize for this error.

2021 Corporate Deal Tracker: Ranking for All The Deals

Last week the Corporate Deal Tracker posted 2021 M&A law firm rankings for Texas-led deals through Sept. 30. This week CDT ranks firms for their participation in deals whether or not their deals were Texas-led.

In the first three quarters of 2021, there were well more than 600 M&A transactions involving Texas corporate lawyers — most of them led by Texas corporate lawyers. In the latest rankings from the Lawbook’s Corporate Deal Tracker database, the top 10 Texas-based offices and Texas-based firms gobbled up more than two-thirds of the transactions reported to The Lawbook. At the top, as they have been for nearly a decade, are Kirkland & Ellis and Vinson & Elkins. But there are also a few surprising new names on the list. The Lawbook has them all.

The Texas Lawbook’s Corporate Deal Tracker documents every M&A transaction handled by lawyers based in Texas without regard to the location of their clients. The latest CDT chart documents 2019 non-confidential M&A deals to date.