The custody dispute was closely watched for its potential implications to allow challenges to other final custody rulings. It also attracted attention for the lineup of high-powered legal talent involved in the appeal. Janet Elliott has the details.

The two-fisted beating of an coronavirus shutdown and an oil market crash is begetting yet another crisis on the horizon in Texas: the need for legal aid. Zero interest rates and dwindling tax revenues are sapping low-income legal resources, even as the need for them is set to explode. “That’s the next big story,” says SCOTX Chief Justice Nathan Hecht. Janet Elliott explains.

The Supreme Court of Texas took the unusual step of vacating a lower court decision in an already moot case involving the Texas Education Agency. In a per curiam decision, the court said it wanted to avoid future “gamesmanship” on issues of public importance. Janet Elliott has the details. 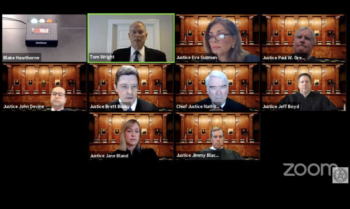 When the Texas Supreme Court convened for oral argument Wednesday, it wasn’t in the familiar halls of the court, but in virtual space. Honoring COVID-19 stay-at-home directives, the court conducted oral arguments in three cases via teleconferencing, becoming only the second state supreme court in the nation to do so (Ohio apparently beat them by a day). Bottom line: The technology performed smoothly for the most part, appellants got their virtual day in court and some of the justices got to wear their robes at home. Janet Elliott describes the court’s first argument in W&T Offshore v. Fredieu

A Most Unusual SCOTX Case

An Email is Still Not a Contract — SCOTX

Emails can be useful tools for negotiation, but they aren’t definitive until both sides agree they are, wrote Nathan Hecht in Chalker Energy Partners III v. Le Norman Operating. Janet Elliott has details.

SCOTX: A Tale of Two Lawyers

Two cases decided by the Texas Supreme Court last week involved
lawsuits against lawyers. One involved representational immunity, the other criminal defense malpractice. Not all they had to say favored lawyers. Janet Elliott explains.

Fort Worth is trying to control the proliferation of game rooms that have “eight-liners”—slot machines that issue coupons for lavish prizes like game systems or other electronics. The operators of those coin-operated amusement machines are fighting back. Janet Elliott explains the issue and how it relates to Chuck E. Cheese.

In some cases, emails can spell out the terms of a contract. But the Texas Supreme Court ruled last week that landowners seeking compensation for a pipeline never constructed couldn’t make that case. Janet Elliott explains.

The Supreme Court ruled Friday that a 1987 will handing down ownership of a Zapata County ranch included its mineral interests. Though it took him six charts to do so, Chief Justice Nathan Hecht showed that the mineral interests were distributed to her heirs exactly as Leonor Ramirez intended.