Boosted by a huge burst in complex commercial litigation in 2022, many of the largest corporate law firms operating in Texas predict they scored another record year of revenues and profits, according to a new survey of law firm leaders by The Texas Lawbook.

The new survey, which also looks at revenues from firms’ 2022 litigation and M&A practices in Texas, builds on other recent evidence of the successful year for corporate law firms in 2022, including rates of promotion to partner and year-end bonuses for associates. In addition, several law firm leaders openly declare their firms experienced record revenues and profits in 2022.
The Texas Lawbook has exclusive details.

Unparalleled Growth, Revenues, Profits – The State of Corporate Law in Texas in 2021

No law firm had ever come close to generating $600 million in revenue from their Texas operations. In 2021, two surpassed that mark. One skipped right over it and went straight to $725 million. This Texas Lawbook exclusive shows, 2021 will go down in corporate legal history as one for the ages.

Corporate law firms operating in Texas went on a hiring spree in 2021. The 50 largest firms representing businesses in Texas added more lawyers in 2021 than they did in any of the past 12 years. A handful of elite national practices grew headcount at a spectacular pace, but many regional law firms also swelled to record levels.

With business booming, The Texas Lawbook 50’s record-setting 2021 was built on five firms with truly big net gains in staff size, another nine with double-digit increases and just two firms with net losses of more than 10 lawyers. Despite all the growth, many corporate law firm leaders say they would have hired even more attorneys if there were lawyers available. Editor’s note: The Texas Lawbook wrongly reported earlier that Bracewell’s lawyer count declined by 11 in 2021. It declined by only two. The Lawbook regrets the error. 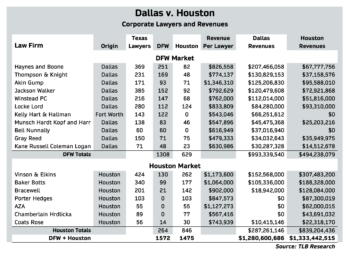 While there has been great focus lately on the Austin legal market, Dallas and Houston still dominate the corporate law world in Texas. But figuring out which market is doing better depends on the measuring stick. One city has more lawyers at corporate law offices. The other generates more revenues from business clients. Find out which city is the unofficial kingpin of Texas corporate law – Dallas or Houston? Or is it a feud running on fumes? This is part four in The Texas Lawbook series on Texas-based law firms.Note: The chart in this story has been updated to correct revenue figures for Locke Lord. 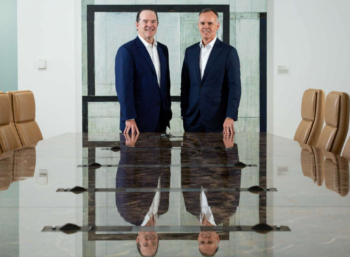 They bear storied names in Texas corporate law: Vinson & Elkins, Baker Botts, Haynes and Boone, Akin Gump, Locke Lord and Bracewell. National firms continue to expand their Texas market share, but the big legacy firms still carry considerable weight in Texas corporate law. They’re not giving in without a fight and busy growing revenues and hiring lawyers in 2021. Editor’s note: The Lawbook article has been updated to show that Baker Botts’ 2020 revenue in Texas was $361.9M in Texas – not $336M as originally reported. 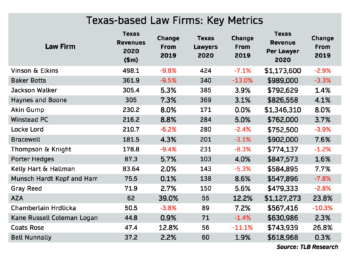 Don’t write the obituary for Texas-based corporate law firms just yet. There are fewer than a decade ago, but most are doing quite well financially. In fact, 10 scored record Texas revenues in 2020 despite the pandemic and economic slowdown. Even more of the Texas-based firms say they’re doing better in 2021 than last year. And all of them are hiring more lawyers to handle the increased legal work clients are sending them. 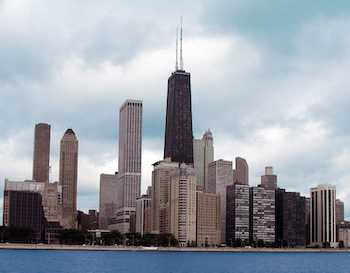 The Texas Lawbook has long documented the battle between Texas corporate law firms and those that invaded the Lone Star state from across the country. The Lawbook has now conducted an analysis of the 11 out-of-state cities with multiple firms operating in Texas. It’s New York v. Chicago v. Los Angeles v. Atlanta v. Kansas City. While bigger may be better for many corporate law firms, roots are significant, too. 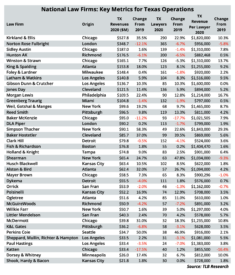 For National Firms, Texas Just Keeps Getting Better and Better

Out-of-state law firms generated nearly $4 billion in revenue from their Texas operations last year, which is more than the Texas headquartered firms made, according to new numbers from “The Texas Lawbook 50.” The exclusive data finds that 40 non-Texas firms are still increasing market share, as lawyer headcounts and revenue-per-lawyer rising at above-average rates in 2020. The Texas Lawbook has an in-depth analysis. 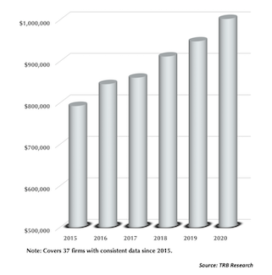 There’s a new king of revenues per lawyer in Texas. For the first time ever, two law firms operating in Texas had RPLs of $1.8 million or more in 2020.

The Texas Lawbook 50 ranking of corporate law firms in Texas shows 21 firms achieved an RPL of $1 million or more last year, but only three of them have Texas roots.

The Texas Lawbook has the exclusive data and the details.

One year ago, corporate law firms in Texas feared financial disaster as they faced the Covid-19 shutdowns. Instead, three-fourths of The Texas Lawbook 50 largest law firms operating in Texas had higher revenues in 2020 than in 2019. Two-thirds posted record revenues, including several based in Texas. Six law firms grew their Texas revenues by 30% or more. The new data shows Texas businesses facing crises relied on their lawyers more in 2020 than ever before.